Numerous bus routes run through Secaucus. The two that are closest to Riverside Court are the #129 and #190.

The #129 bus runs between Secaucus and New York City. During rush hours, it stops at the bus stop in front of the Extended Stay hotel, which is right outside the front gates of Riverside Court. In the morning, it can get you to the New York Port Authority Bus Terminal in as little as 20 minutes. Unfortunately, during off peak hours, the #129 bypasses Extended Stay. Instead, however, it stops at Secaucus Plaza and the Crowne Plaza hotel on Meadowlands Parkway, which many consider to be walking distance from Riverside Court*.

Bus #190 is the work-horse of all the bus lines that pass through Secaucus. For most of the day, this bus runs at least once every 20 minutes. And unlike many other lines, the 190 runs late into the night. During rush hours, the 190 passes by Paterson Plank Road and Hagan Pl, which is about 10 minutes from Riverside Court on foot. During off-peak hours, the 190 no longer runs near Riverside Court, but it still stops at Secaucus Plaza, which many consider to be walking distance from Riverside Court*.

Other buses in Secaucus

Besides the above two routes, Secaucus is also served by the following bus lines. They do not run near Riverside Court, but most are still within walking distance for those who don't mind a 15 to 30 minute walk*.

* When walking between Secacus Plaza and Riverside Court, be sure to use the side gate entrance to Riverside Court. This pedestrian-only entrance opens up to the local street Hagan Place, and it will shave considerable time off your walk. 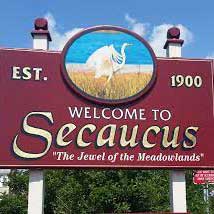 Secaucus, New Jersey
Learn all about everything Secaucus has to offer plus the latest news and events around town.